Well, the year came and went. 2017 saw two major changes in my life: I decided to become vegan, and I changed my job after a decade. Both of these changes have helped me rebalance, and regain control of my wellness. The change I made to my diet had profound effects on my energy levels, and gave an incredible boost to my culinary creativity. I’ve have not felt so inspired and motivated to try new things for a long, long time.

On top of wanting to eat and make different food, I also decided to share everything. That’s how this blog was born! It’s been a great adventure because blogging, sharing, and being engaged in social media in many plant-based and vegan groups has been eye-opening. There’s so much creativity, encouragement, and positive energy out there!

I appreciate that many of you may be struggling because a life-style change is never an easy thing, and I also gather from comments and posts that many are surrounded by family, friends or work environment that does not support or even approve of the plant-based and vegan eating and living. The best advice I can give you is to take it one step at a time, and keep reminding yourself of why you decided to make this huge change to begin with. And: keep creating delicious dishes and keep serving them to all you love and care in your lives to spread the well-being and comfort that well-prepared and nutritious food brings.

So, as is customary to do as a year is winding down I took a look at Eat the Vegan Rainbow to see what people enjoyed reading the most. Not surprisingly, the most read post of 2017 is “5 Must-try Recipes for Beginner Vegans” which I put together after being a vegan for about 6 months, to highlight some of the recipes that I found incredibly helpful. And I am glad to see that many of you have found it to be useful as well!

When it comes to my original recipes, there is definitely a clear pattern to the top five. All top five recipes are substitutes to animal-based recipes, and provide a healthier alternative to the types of foods most of us have been exposed to for most of our lives. So, without further ado I give you the Top 5 Eat the Vegan Rainbow Posts of 2017: 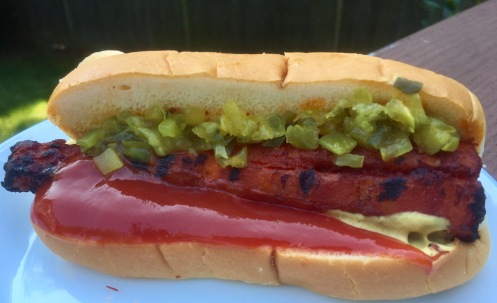 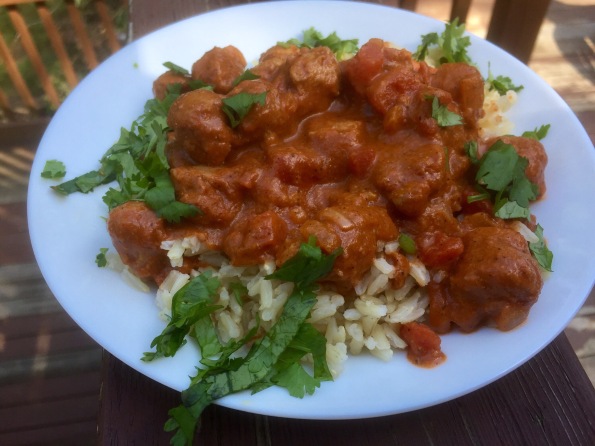 I can’t leave without asking you to share some of your favorite recipes. What were your clear winner in 2017? Something similar to what I highlighted above, or something completely different? Let’s share each other’s food and thoughts about eating and well-being, and keep helping each other navigate the world of plant-based foods and flavors. I wish you a Happy and a Healthy New Year!!!

During long, winter months when days are short, snow piles up high and it does not get above freezing for weeks on end, New Englander likes to enjoy things like pots and pots of piping hot New England Clam Chowder, a creamy and rich seafood based soup. This winter I did something that just a year ago would have sound like a total science fiction and impossibility. I made completely plant-based, clam-free New England “Clam” Chowder.

Now that we are approaching the high summer, I felt ready to tackles another recipe that New England self-identifies with, the Lobster Roll! If you’ve never tasted or seen a Lobster Roll let me quickly describe how it’s made. You take a hot dog bun, steam it or toast it and fill it with chunk so of cooked lobster meat tossed with some mayonnaise and chopped celery. The main flavor you get is usually the combination of mayo and celery, and you may get some citrus overtones since the roll is often served with a lemon wedge.

So far, jackfruit was my go-to seafood replacement. Jackfruit works really well in crab-less Jackfruit “Crab” Cakes, in Clam-free “Clam” Sauce, and in vegan New England “Clam” Chowder, but for the lobster rolls I wanted a different texture and milder flavor as canned jackfruit that I have access to is usually a bit salty and sour. So I did a little bit of research and discovered that heart of palm seems to be everybody’s favorite lobster stand-in. I have not really used heart of palm before so I was not sure what exactly to expect.

Luckily for me, my local Trader Joe’s carries 14 oz. jars of heart of palm in brine, so I decided to go for it. This amount of hearts of palm is enough to make four generous rolls using a standard size hot dog bun. The rolls come together in less than ten minutes and definitely qualify as a quick lunch or dinner. I recommend rinsing the heart of palm well and chopping it into relatively small piece. I know that chunks of lobster in some of the most revered lobster rolls out there are pretty large but in this case I do think that making celery and heart of palm pieces about the same size works better to integrate the flavors. Plus it makes for more manageable bites. So, get a large mixing bowl out and lets make a much lighter, cheaper, safer and, lets face it, tastier and kinder lobster roll.

What you’ll need (for 4 servings):

“Waste not, want not” is how the saying goes, encouraging us to not to waste what we have and conserve resources. Well, I may be extrapolating here, but it is not a bad maxim to cook by, if not live by. I’ve been struggling for number of years now to find use for mushroom stems, especially the big, almost woody stems of large white button mushrooms. The caps are fabulous for stuffing, and I’ve already shared my Mashed Potato Stuffed Mushrooms with Cashew Sour Cream recipe, but stems are a bit trickier. I usually chop them up and combine them into the stuffing, or don’t even bother removing them if I use mushrooms in a soup or stew that will simmer for a while. However, big stems just don’t work well in some of the quicker recipes.

That’s why I got really excited when I found out that mushroom stems can be used as a sort of replacement for large scallops. For example, Cara, the person behind a fabulous blog called Fork & Beans, used king oyster mushrooms to make a “scallop” pasta. That got me thinking: why not use the large stems I got to create a vegan “scallop” dish?

There is one major trick to transforming mushroom stems into scallops – you have to soak them in hot water 1-2 hours to overnight. I soaked my batch overnight, actually for almost 24 hours, which is totally an overkill but I just had other things to do the mushroom stems had to wait happily soaking in the refrigerator. The mushroom stems I had were pretty long so I had to cut each in half, so my scallops were about 1 in (2.5 cm) thick. That worked well in terms of cooking too! Before using, drain and dry your mushroom scallops.

Another advice I can share is to make mushroom scallops the same way you would make scallops, which in my case means simply browning them on both sides, using a bit of oil or cooking spray and sprinkling with Old Bay Seasoning on one side as the first side is finishing cooking. The cooking itself takes no time at all: three to five minutes per side should do the trick!

If you are serving the mushroom “scallops” as is, I suggest you sprinkle them with some lemon juice. I decided to serve them with a Cilantro Yogurt Sauce which I made from homemade soy yogurt, fresh cilantro, crushed garlic and lime juice. The homemade soy yogurt was simple to make and I recommend you try making your own, but if pressed for time store bought plain soy yogurt will do the trick. Here, the tangier the yogurt, the better the yogurt sauce so choose the brand with more tang – I can’t recommend any here because none of the store bought yogurts I tried were really all that good (thus the decision to make my own!). You can adjust the tang with adding a drop of apple cider vinegar or a bit more lime juice.

You can serve these mushroom “scallops”, and the sauce, with pasta or polenta, but I plated them as an appetizer over some fresh baby spinach leaves. The “scallops” were hot when plated, and their heat wilted the spinach a bit as well. I let them sit for few minutes before layering on cold yogurt sauce and serving immediately!!!

In case you were wondering, these don’t really taste like scallops but they are delicious and I love the idea so I will definitely be trying to get the flavor closer to the original, perhaps by trying a different mushroom variety.

Cooking is in many ways similar to doing experiments in a research lab. In a lab we start from a protocol, or a recipe (oh, yes… we use recipes in science big time!), and more often than not we change things up to see what happens to our experimental results under a new set of parameters or conditions. We make observations and jot them down. The main and the biggest, actually a life and death, difference between cooking and science is that you don’t taste results of your science experiments, while tasting cooking experiments is recommended.

Why do I mention experiments? Well, although seldom talked about most experiments actually give negative results or even fail. Now this happens in cooking too, but I have to say at this point in my life not very often. So, it is with a bag of mixed emotions that I am jotting down this recipe – the Clam-free Clam Sauce with Black Bean Pasta – as this did not turn out the way I was hoping it would.

The sauce itself is actually spot on, creamy and delicious. It uses jackfruit as a stand in for clams, similar to what I’ve done in my New England “Clam” Chowder, and a batch of homemade vegan mozzarella, recipe for which I found on a fun vegan cooking blog site it doesn’t taste like chicken. This vegan mozzarella, combined with the jackfruit, some almond milk, lemon juice, and a dash of Old Bay Seasoning gave a beautiful, rich, and creamy sauce.

The main problem was that I decided to pair this delicious sauce with black bean pasta, instead of more traditional linguine pasta, and this DID NOT work at all. The black bean pasta had a strong flavor that interfered with the subtle flavors of the Clam-free Clam Sauce so the final dish was definitely very far from authentic pasta with the clam sauce.

Conclusion of this experiment? When in possession of the clam sauce, even if it is a vegan version of it, just go with linguini, which is exactly what I’ll do next time!