By now you probably figured out that I am a huge fan of Indian cuisine. Perhaps it’s the spices, perhaps it’s the long and slow simmering, perhaps is the whole culture of not eating meat that produced an abundance of vegan-friendly recipes and ingredient combinations [EDIT: I was alerted that current facts suggest that India may not be as vegetarian as previously thought; it seems that it’s a myth that India is mostly vegetarian]. Whatever it is, Indian cuisine has always been a huge inspiration for me, and I’ve been sharing some of the results on this blog. Past successes include Jackfruit Tikka Masala, as well as Chicken-less Tikka Masala made with soya chunks, and my version of Sabudana Khichdi.

This recipe is a vegan version of a minced lamb dish called Keema Matar. The recipe uses minced soya chunks that give the final dish the same consistency and appearance as the original recipe. You could use TVP (textured vegetable protein) but note that the food will probably have a softer, less chewy bite to it.

What makes this recipe work are, of course, the spices. I use some pretty standard spices like garlic powder, freshly grated ginger, chili powder, a cinnamon stick, some more specialized spices like turmeric, coriander powder and coriander pods, and some spices that you can only find in an Indian grocery store, like Indian bay leaves and matar masala.  Fear not if you don’t have easy access to these last two spices because you can use regular bay leaves and some cumin powder instead.

The best way to ensure that your soya chunks absorb all the flavors is to cook them according to instructions, which usually say “boil in water for 5 minutes”, rinse, drain, gently squeeze to remove some of the excess water, and mince them – I use a food processor for mincing – and then mix the minced chunks with spices and let them marinate for a while. (Note: if you are using TVP, you will not need to mince since the TVP flakes are already about the right size once they are fully soaked. Although hard to remove access water from TVP once it’s fully soaked, I do suggest you give it a gentle squeeze before marinating!)

Another ingredient that is needed for this dish are green peas. I use frozen peas, and I don’t bother with defrosting – just mix them into the simmering minced soya chunks and they’ll be fine. Once done, serve over  some Basmati Rice, sprinkle with some fresh cilantro and add a side of raita (yogurt sauce with chopped cucumbers and mint – I make mine with cashew yogurt and it comes out great!) or even a piece of naan and you will have an unbelievable restaurant-style dinner right in the comfort of your home. 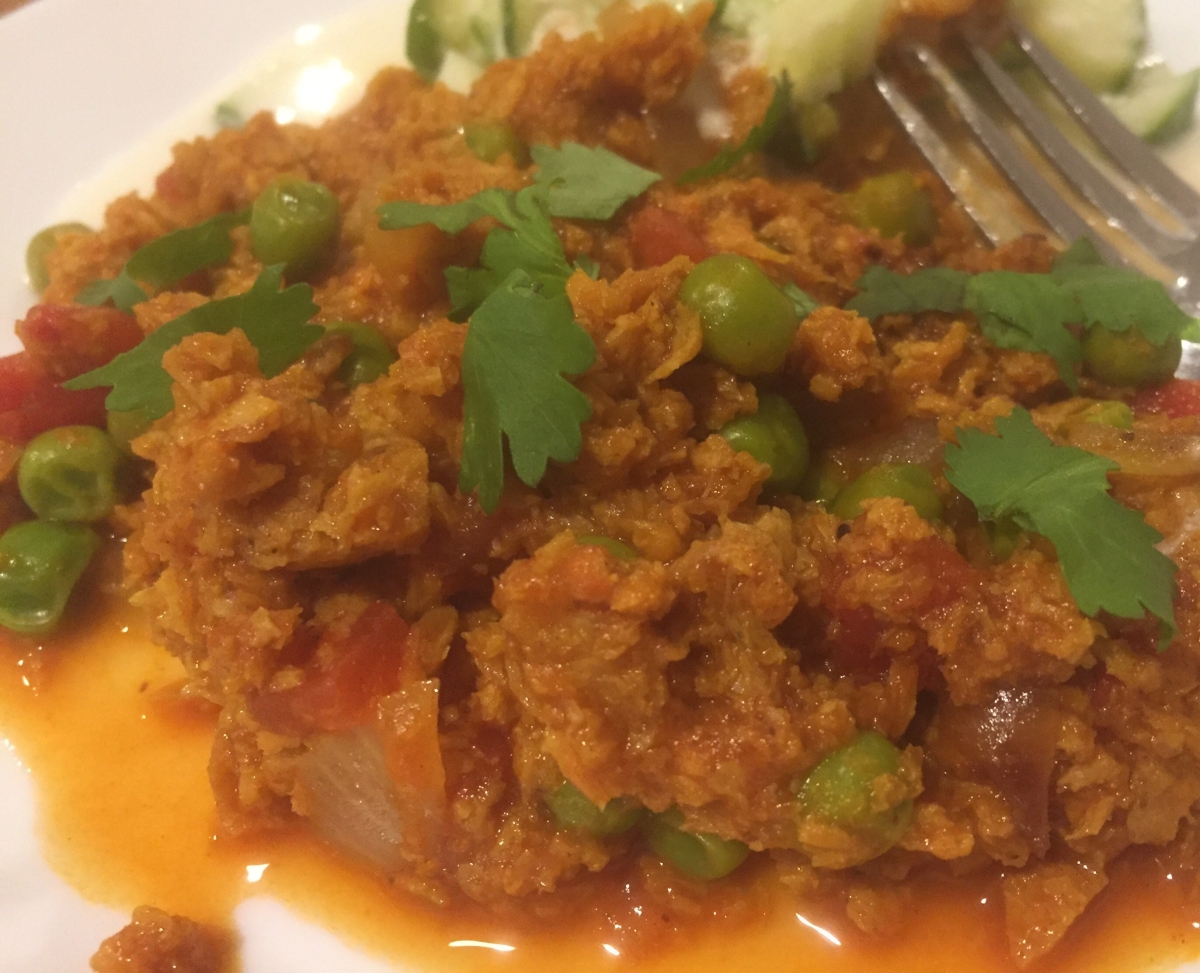 One thought on “Meat-less Keema Matar”