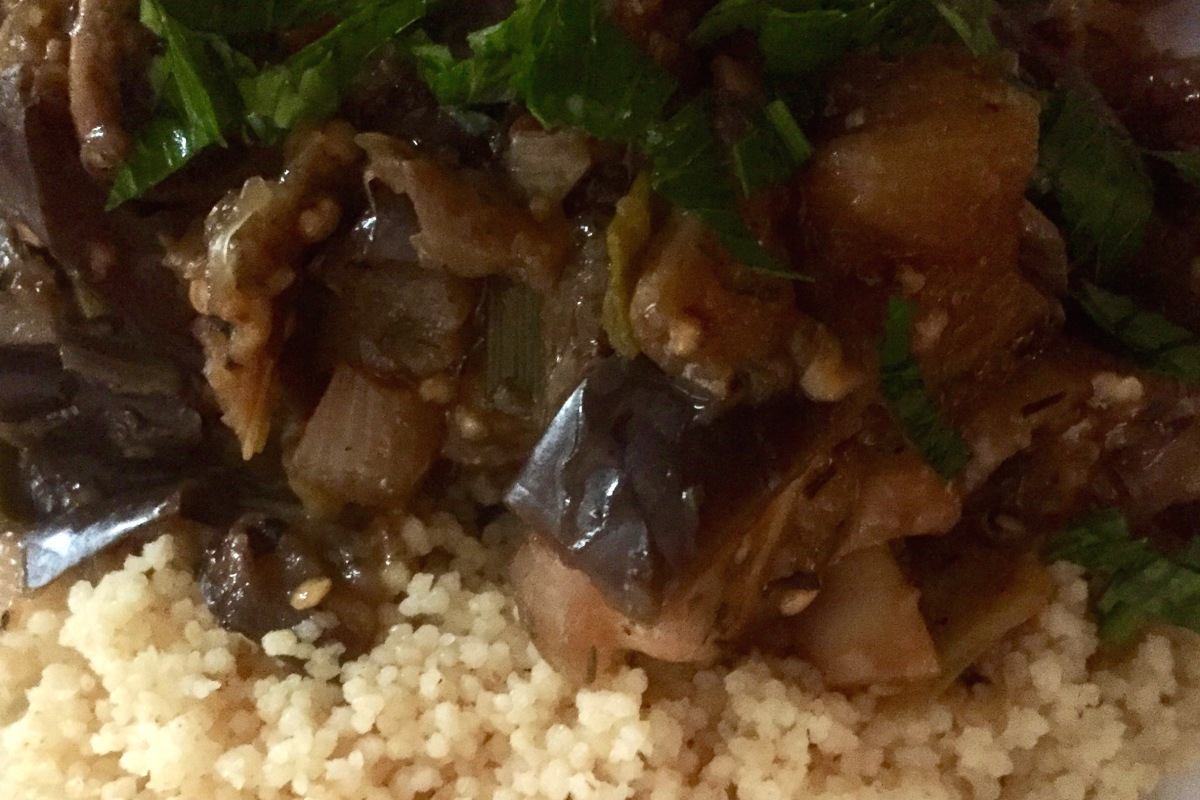 Sometimes you need to throw together couple of ingredients you have on hand and have the meal ready in a blink of an eye. This recipe is your one way ticket to a no fuss meal that is filling and satisfying. When it comes to easy and hands-off cooking nothing comes even remotely close to couscous. I’ve been making couscous for years and all you need to remember is to 1:2 ratio – 1 cup couscous plus 2 cups of boiling water – and to keep your lid on and your hand off.

Basically, once you pour your boiling water over the couscous and give it one gentle stir, all you need to do is put the lid on and let the couscous sit for 15-30 minutes. For best results use a fork to fluff the couscous up and that’s it – a delicious base for your meal is done!

The rest is very straightforward. The eggplant needs to be chopped into good size, 1 x 1 in (2.5 x 2.5 cm), cubes and mushrooms need to be quartered. The cooking begins with browning onions, then adding eggplant and letting it brown for a bit, adding mushrooms and sprinkling some corn starch to bind everything together, especially mushrooms that tend to release a lot of liquid. Another important thing to do is deglaze the pot as a lot of great caramelized flavor will be stuck to the bottom of your pan. Here, just a little bit of vegetable stock will help. 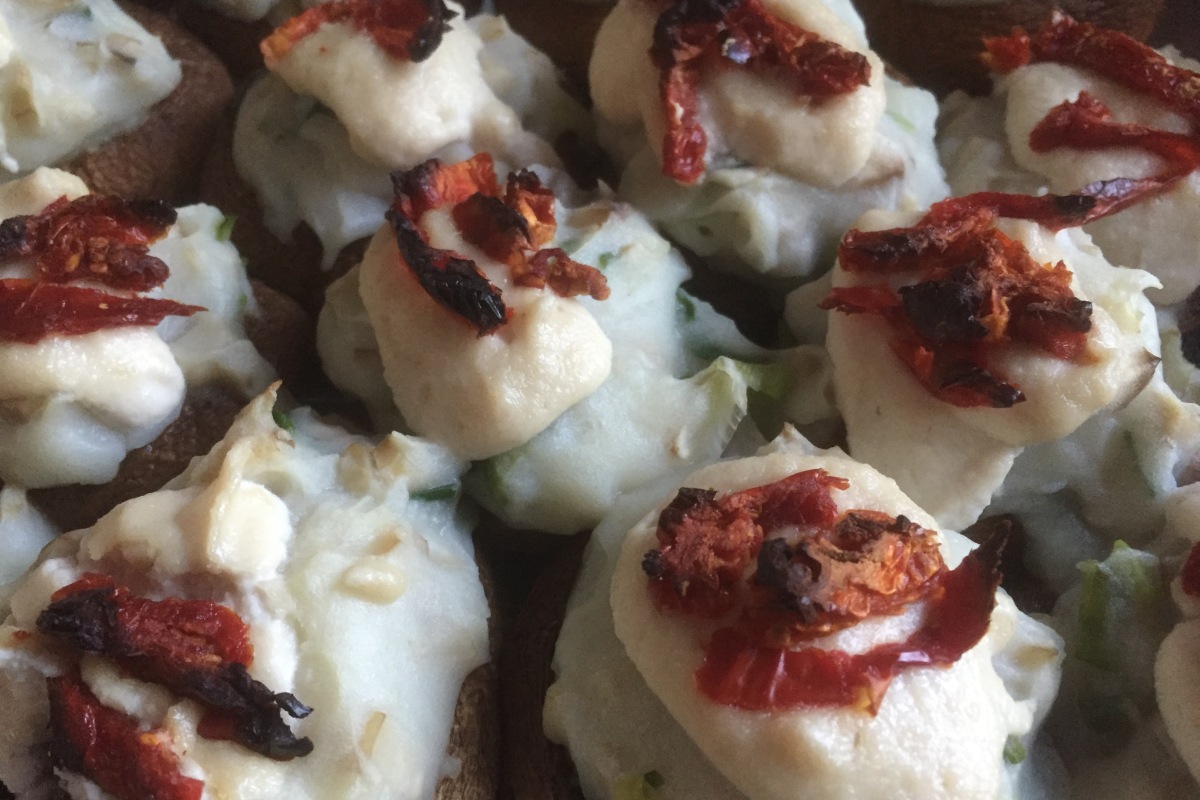 Fully loaded vegan mushrooms are finally here! Last time I went grocery shopping large white stuffing mushrooms were on sale and they looked so inviting that I had to have them. For most vegetarians and vegans mushrooms are a common ingredient as they add that elusive umami flavor to dishes. I used them fairly often and have featured them in  my Vegan Stuffed Pepper recipe.

This time around it is the mushrooms that are getting stuffed, and the stuffing I decided to go with is yummy, silky smooth and creamy mashed potatoes. Additionally, just to kick it up a notch I made some Cashew Sour Cream by Oh She Glows to add a bit of flair. Finally, sun dried tomatoes on top are for loveliness, color and for a bit of sweetness.

There are really two tricks here. One is to bake the mushroom caps on their own, and the other is to use a blender to purée the potatoes.

To get your mushrooms going I first remove the stems, but I don’t throw them away  as I use them as a part of the stuffing. I place mushroom caps their open ends up on the parchment paper (or foil) covered baking sheet and put them in the oven for about 20-30 minutes. The point is to get the caps soft and to let the mushrooms release excess water. At the end of the baking each mushroom cap should be filled with brown liquid (see below), and I dumped this liquid out. Transfer your mushroom caps into a greased baking dish with tall sides that will help with making sure no stuffing gets out while baking.

Using a blender to purée the potatoes makes them into a creamy heaven that is perfect for stuffing. I would not recommend using the blender method if your end point is mashed potatoes because what you get is quite smooth, but for topping something like a Vegan Shepherd’s Pie or stuffing these mushrooms this method is perfect.

All in all these Vegan Mashed Potato Stuffed Mushrooms with Cashew Sour Cream are perfect as an interesting appetizer and entertaining, as well as a really great dinner in their own right. The amount of mushrooms I used is huge and it was definitely meant for sharing and enjoying in a large group, so feel free to scale down accordingly!